6S is seen by many as the ‘next step’ in the evolution of workplace waste elimination and efficiency improvement. As with any type of change, however, there are also some people who are resistant to the idea. Those who have adopted the 5S methodology may believe that 6S is an unnecessary move. There is not necessarily any right or wrong answer to this great debate, but it is a good idea to take some time to learn as much as possible about both options.

While most people will already have a good understanding of 5S, it is important to review to ensure everyone is clear. 5S is a methodology to improve workplace organization and eliminate waste throughout a facility. It was started in Japan and has five steps associated with it, the first word of each step starts with an S, which is where it gets the name. The 5S’s are:

Now that you understand the 5S methodology the question is what is the sixth S in 6S? The sixth S stands for Safety. Improving the safety of a facility is obviously a very good thing and should always be the goal of any company. That being said, however, many people question whether or not this fits in with the 5S strategies.

Arguments for Including the 6th S 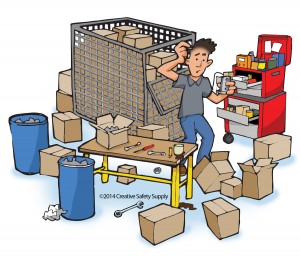 Those who argue in favor of adding the sixth S to their methodology stress the importance of safety in the workplace. The following are some of the many reasons given arguing that safety fits in nicely with the other topics in 5S:

In addition to these things, having safety be a part of the 6S strategy helps to maintain an ongoing focus on facility safety that is otherwise difficult. Even facilities that take steps to improve safety often do so in spurts rather than in a continuous and predictable way. Adding safety into the 5S methodology (and making it 6S) will help ensure that safety improvements are regularly undertaken throughout the facility.

Arguments for Excluding the 6th S

One might say that while safety improvements are absolutely a positive thing, it should have its own methodology or strategy rather than hijacking a proven system (5S). After all, nobody would argue that all good things in a facility should be worked into the 5S systems.

Some people even say that the only reason anyone is even thinking about adding safety to the 5S system is because it already starts with an S. This, however, is not a good reason to add something in.

Safety is built In to 5S

One of the strongest arguments against 6S is that safety is actually already built right into the 5S methodology. Each of the existing steps in the process are already designed to help improve safety as well as efficiency. Let’s look at each of the existing 5S’s and see how this works:

While it is certainly clear that safety is ‘built in’ to each of the 5S’s, that does not necessarily mean that it should not get its own S. While the other tasks can improve safety, they are not dedicated specifically to safety. The argument for having the 6th S is that some things are specifically done just to improve safety, but don’t fit in any of the other S’s.

Having the 6th S allows facilities to take steps only to improve safety, which is absolutely a good thing. That being said, however, having 6S in your facility is not the only way to maintain a good focus on improved safety. It is just one of many options to consider so make sure you are taking the time to see whether or not 6S is a better option than 5S based on the specific situation in your facility.

Weighing the Options for Your Facility

When it comes right down to it, one really needs to look at safety and see if it fits logically in with the other S’s in their own 5S system. If it doesn’t, thenn the system should not be updated to 6S and things should be left as they are. If it does, however, then it can be a good idea to update your 5S strategies to become 6S.

This article isn’t likely to end the great debate over 6S vs. 5S but it will hopefully give facilities the information to decide whether or not updating their own implementation is a good idea. If a facility finds that they can operate more efficiently and more safely with 6S than they can with 5S, it is clearly the smart choice. Even if the overall manufacturing industry does not implement 6S methodologies, individual faculties can still find great benefits in doing so.

Taking some time to really think about how your facility can benefit most from eliminating waste and improving safety will help you to decide what to do. Whatever you decide, always remember that safety is an essential component of running any company properly.

Make sure to check out Creative Safety Supply for all your 5S, 6S, and safety product needs.