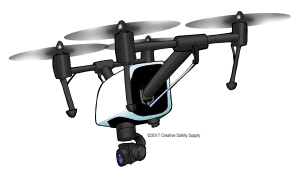 In just the last decade, drones have gone from something of an experimental concept to something that we see all the time. They are used for recreation, military, businesses, and anything else you can think of for a wide range of different things. As more and more people and businesses find uses for drones, safety concerns are going to be a major issue that needs to be addressed.

Learning more about drones, their uses, and how we can keep them safe is going to be important in the coming years.

While there are obviously a lot of great uses for drones, they all involve flying drones in areas where they could potentially cause problems. In order to avoid these types of issues, it is important for people to start thinking about drone safety today. There will undoubtedly be laws and regulations that are put in place to improve drone safety, but the community of people and businesses flying them should also look at how they can improve drone safety on top of any governmental requirements.

One of the biggest concerns is that drones can fly in restricted airspace around commercial airports or even military bases. While drones are far smaller than most planes, they could cause serious damage should they be flown into a turbine. Anyone flying a drone needs to make sure that they keep it well aware from airports, and they never fly the drone high enough that it could interfere with any manned flights. 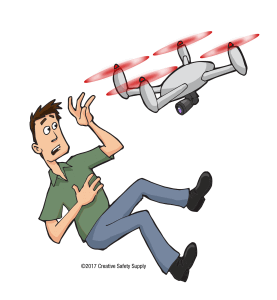 Another issue that we’re already seeing is when someone loses control of a drone and it crashes. They can crash into people or property, causing extensive injury or damage. While drones are quite stable and easy to control, there is always the risk of losing signal or having human ‘pilot’ error.

Establishing safety standards regarding the paths that drones should take is a great place to start to reduce the risk of this type of issue. When companies are flying drones in the future, it is conceivable that they would be required to follow set paths just like cars do today. This would minimize the risk of accidents or injuries should one crash.

Another potential way to improve drone safety is through built-in safety features. There are many options that could be effective, such as having the drones automatically land themselves should they lose signal with the controller. Of course, this would be made irrelevant should the drones be self-piloted and not require human controls at all.

An issue that is becoming very common is when drones interact with wildlife. Large birds of prey like eagles and hawks have been known to attack drones, causing extensive damage to them and resulting in them falling out of the sky. There is a real risk that these large birds would also be injured in the process, which could be very bad for the environment.

There is currently no standard solution for this, but some proposed ideas include having the drone emit a noise that would discourage animals from attacking it or adjust the color or shape with the same intent. Further testing is needed, but something certainly has to be done in order to keep both drones and wildlife safe as the number of drones expands.

Drones today typically operate with a number of different propellers spinning at extremely high speeds. Commercial versions of most drones have these propellers made of a strong material, which has the potential to cause serious injury.

In order to minimize the risk, many drones already have plastic ‘cages’ built around the propellers to keep them from coming in contact with fingers or other parts of the body. Taking further steps to ensure those who work with, or come in contact with, drones are going to be critical in the coming years.

With Safety – The Future is Bright for Drones

As more and more people and businesses are using drones for a wide range of different things, safety is going to be increasingly important. Taking some time to really think about drone safety now will avoid many potential problems in the future.