Radios, Over-the-Air television, remote-controlled drones, blue tooth devices, WiFi devices, and of course cell phones. Whether you use wireless technology or not, you are being exposed to the wireless signals that they are emitting. While most people just accept this as normal, a growing number of people are starting to wonder if this type of thing is truly safe. Let’s take a look at what experts say, and also about some of the concerns people are having.

What Does the FCC Say?

The Federal Communications Commission (FCC) says that wireless technology doesn’t really present any significant health risk. That being said, they also admit that there isn’t yet a federally approved national standard regarding what would be considered safe levels of exposure to the various types of wireless signals.

Other government agencies such as the Environmental Protection Agency (EPA), the Food and Drug Administration (FDA), the National Institute for Occupational Safety and Health (NIOSH), and the Occupational Safety and Health Administration (OSHA) are working to look into potential risks related to wireless exposure. Thus far, the levels of exposure experienced from normal everyday use are not considered to be a risk for humans.

The main safety standard related to these technologies is from IEEE and NCRP, which recommend limiting exposure based on a specific absorption rate (SAR) of less than 1.6 watts per kilogram as averaged over one gram of tissue. The FCC has based their position on this and has required that all wireless devices in the US operate below this level even when on their highest settings.

Ok. Now that the boring technical stuff is out of the way, let’s look through what types of risks many people are really worried about, and if they should really be a concern. 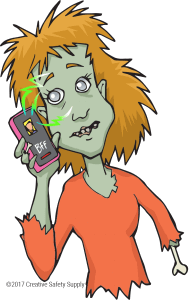 Most wireless technology emit a low-level radiation. Depending on the type of device, this could be either ionizing or non-ionizing radiation. This is similar radiation that one would experience from microwaves. Studies have found that long-term exposure to this type of radiation can cause a variety of brain cancers, ADD, hair loss, and other issues. This direct impact on the brain, some may believe, could cause one to mindlessly try to replace their own brain by consuming the brains of others, thus ushering in the zombie apocalypse. While the risk of this is low, if you find yourself thinking about biting through the skull of a co-worker, it might be time to turn off that blue tooth headset for a while. 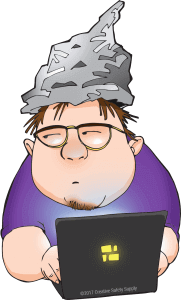 We all know it. If there is any way for the shadow governments of the world to get in and take control of your mind, they are going to do it. In the average city today, people are bombarded with all sorts of different wireless signals. Even with advanced equipment, it might be hard to detect background signals added in by nefarious agencies.

While most people don’t think that the government is controlling every move the masses make, there are some who think that they use wireless technology to gently push people to do what they want. The constant low-level signals could contain messages that encourage people to obey, vote a certain way, or otherwise act in a specific way. While there may not be any evidence at all that this is taking place, many people won’t want to put their autonomy at risk. According to highly reliable dark-net websites, the easiest way to protect yourself from these government mind control attempts is with a simple tin-foil hat. Some people also line the walls of their home with tin-foil for added protection. 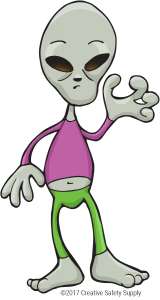 For thousands of years humans have lived on this planet, and while there were advancements in tools and things like that, the concept of wireless technologies was never even really dreamt of until about a half a century ago. The incredible advancement in human technology over the past several decades is quite unbelievable. Which brings us to one of the risks some people worry about.

Some people believe that our rapid technological advancement was brought to us by aliens, who helped to push us into the modern age. The question is, did they do this for benevolent reasons, or something more sinister? The wireless technologies could be from aliens, who are using them to slowly manipulate our DNA to become like them. This could be their method of growing their race. Or…They could be manipulating our DNA to become food that they can consume, or slaves to control. While we don’t know, and there may be no evidence at all for this, it is certainly something worth thinking about.

While these ‘risks’ may seem comical and outrageous, they do bring up an important point. Wireless technologies do emit low-level radiation. There are reports and studies that indicate that extended exposure can increase the risk of tumors and other issues. These wireless signals also contain endless information, which can be a direct risk for our devices and technologies.

While it doesn’t make sense (and maybe downright impossible) to stop all exposure to wireless technology, it can’t be a bad idea to try to limit the exposure. Keeping in mind the fact that there are some indications of risk, and that a lot is still not known about how wireless signals impact our bodies, the smart thing to do is to approach it with some level of caution, but not with paranoia.