Kaikaku – What Is It?

Kaikaku is Japanese word that means ‘radical change.’ It is also a business concept that looks at the idea of making radical changes in order to achieve significant improvements. Some people compare it to the Kaizen system, but that is a mistake. While both are options for making changes to a business practice, Kaizen is focused on small, incremental changes. Compare that with Kaikaku, which is for large scale changes, and it is easy to see how they are unique. 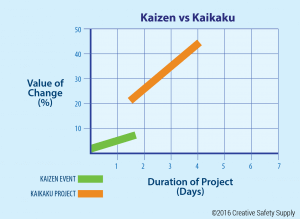 It is a mistake, however, to think that the two methodologies have nothing in common. To start with, they were both developed in the Toyota Production System, which is well known for quality improvements and efficiency.

In addition, the end goal of both concepts is fairly similar. It is just the scope of the change that will determine which strategy is required. So, businesses that are looking to make improvements should use both of these strategies together. Determining which one is right for which projects is what is essential for the success of either concept.

When planning a major project using the Kaikaku system, you are going to want to categorize it into one of the four project types. These project types are:

Classifying the different types of change into the proper categories is very important. It will make it so you know what to expect, and how it should be implemented. A local change, for example, might only be used in one facility (though sometimes it will be applied to an entire company).

Scope of a Kaikaku Project

Of course, there can be some flexibility in this. Companies are free to label each project in any way they want, but these are the widely agreed upon standards that should typically be followed.

Some companies make the mistake of attempting to push Kaikaku projects as often as possible because of how effective they can be. The fact is, however, that most changes that are needed in a facility are going to be quite small in scope.

Rather than constantly looking for radically innovative, or even major local projects to take on, facilities should generally look at these types of things as the exception rather than the rule. Of course, when a major improvement opportunity appears, it should always be acted upon right away to help get the most out of the opportunity.

It is a concern, however, that companies can start overlooking small, incremental (Kaizen) changes that, when added together, could be quite significant. Kaikaku projects will typically occur far less often than Kaizen, but that doesn’t mean they are any less important to the long term improvement of the facility.

One final point to make when just starting to learn about Kaikaku and how this methodology can help your facility. When someone comes up with a major improvement idea, it should never be dismissed no matter how outrageous it may seem.

Remember, most major steps forward were looked at as foolishness when they were first thought about. Kaizen is perfect for the smaller, more predictable improvements. Kaikaku is often going to be for that ‘one great idea’ that can truly change the way a facility works. Even if it is not a major innovation, major projects are important for keeping a company on the cutting edge of their industry.

Make sure to check out Creative Safety Supply for all your Lean and Six Sigma needs.