Lean Efforts – To What Extent Should We Quantify?

Should We Quantify All KAIZEN/Lean Efforts from the Shop Floor?

Ben Huang, a professional in the midst of implementing Lean techniques into his workplace, has a dilemma. As he related on a LinkedIn group this past week, Lean is apparently going well in his business, but he’s unsure of the extent to which he should be documenting and measuring the process. 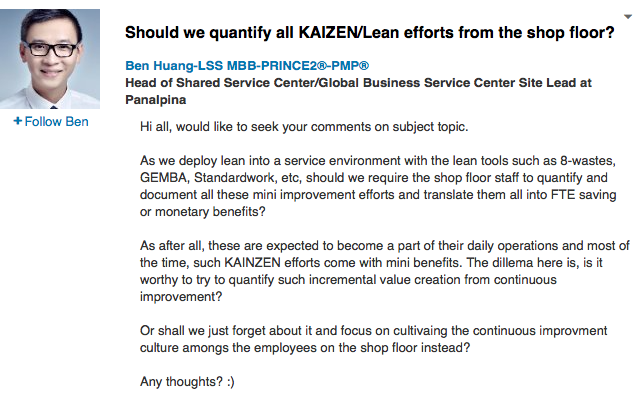 On the one hand, even small improvements may be contributed to larger ones, and he doesn’t want to lose momentum that might be gained from the small ‘victories’ or changes. One the other hand, documenting every single small procedural change that came about as a result of a Lean technique (Gemba walk, kaizen, etc.) could end up time consuming to the point that it’s actually creating time waste and taking away from other tasks.

It’s not an easy balance, and Huang reached out to other professionals on the network to give him some input. While even some of the most thought-provoking questions and topics I’ve seen on LinkedIn have fizzled out, Haung’s inquiry seems to have sparked a lively discussion; apparently, a lot of people have an opinion on this. What’s even better, is that many of these opinions seems to be derived from current operations amongst other professionals, giving them the additional weight of real world experience.

Let’s take a look at what others from around the world had to say, and how their input might be able to help you if/when you find yourself in a similar situation to Huang’s.

You Should be Celebrating all Lean Victories

On the other hand, you can always categorize changes differently. At her company, Ganesh says that they will often categorize continuous improvement changes not by the size of their impact, but what they impacted. For example, one could simply say “today we helped to reduce cost at X stage of production” or “today we reduced the time it takes to move from stage Y to stage Z.”

She states that trying to measure and individually identify and report every little change could be overwhelming at best and waste resources at worst, so it’s best to keep things simple.

Peter Herling, another poster, agreed and added the following:

“Culture drive values drive behavior. If you do not celebrate the small successes you are sending a signal that they do not matter” and suggested instead that managers “Think of simpler/less stringent ways to measure them to ensure ROI time to do so.”

“Some CFO’s and other upper management only buy in after they see the return on their investment. This is especially true in the beginning,” she says.

Hayes says that in many of the companies that she’s helped implement continuous improvement for, she followed a model that slowly transitioned between the two extremes of this debate. In the beginning, even small change and success was not just recorded, but quantified. Being able to show time or money saved or potential production increases would help keep upper management happy at a critical time – namely, one where they were questioning the costs and benefits of hiring someone to lead their Lean efforts.

Over time, however, she says that managers and CEO’s tend to “drink the Kool-Aid,” and not need as much constant reassurance. During this period, Lean implementers can focus on doing their jobs to the best of their ability without the added burden of quantifying and playing up every little change along the way. It is during this period, anyways, that businesses are (arguably) going to see the largest benefits of Lean start to come to fruition.

It’s all about the Mindset.

According to Winney, the argument shouldn’t be over which things you record or how you measure them, it’s about keeping your team happy and taking steps forward. Celebrating any small victory like you would a big one helps to make people feel like their efforts are making a difference.

In reality, these small improvements are making a difference as well, he says. According to Winney, there are two primary reasons that managers should always take note of the efforts employees make, however small.

1. You’ve got to be able to keep people going. Encouragement and positive feedback on a consistent bases will help people to internalize new habits and tasks. In short, he says, always motivate your teams to “keep up the good work,” especially if you’re trying to convince them that it’s so important that they do.

2. Having a list of everything done in the course of your continuous improvement efforts at end of year meetings can be impressive. Even if you just estimated impact values, or didn’t assign them at all, having a list of 150 individual items where you can say, ‘hey, look at all we did!’ can be powerful. Plus, it will likely be easier to see real, indisputable impacts once you have a large group of items together.

Poster Aniruddha Sahasrabudhe dropped this fitting Einstein quote into the mix that’s just too relevant not to include. Ultimately, how you quantify, or if you even quantify, all of your continuous improvement increments is up to you. It’s dictated by things like your business model, responsibilities, free time, employee count, organizational systems, and more.

You may find that someone commenting on the internet has an opinion on the matter completely irrelevant to you own situation, or you may find it spot on. Other suggestions throughout the discussion, in case any of them happen to jive with you, include things like categorizing changes in terms of their size, analyzing whether or not each change is really an improvement at all, or just a change, and focusing primarily on cultural workplace change before getting concerned about the numbers.