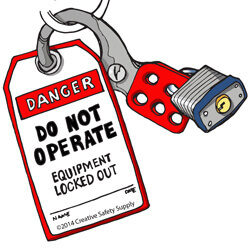 When it comes to protecting people while working on machines within a facility, few things are as effective as following the lockout tagout procedures. If you are not already using this safety method, it is a process in which the person (or people) who are going to be working in a hazardous location will physically remove the power from the machines in the area, and place a lock on the power source.

Along with the lock, they will put a tag letting people in the area know that they have done this intentionally, and that they will restore the power when the work is done. The point of this is to make it impossible for the machine that is being worked on to accidently be reenergized while the person or people are working in a dangerous area.

When done properly, this safety procedure can virtually eliminate the risk of electrocution or other injury related to the machine activating. Unfortunately, people still make mistakes with this procedure, which can lead to very serious injuries or even death.

“Compliance with the lockout/ tagout standard prevents an estimated 120 fatalities and 50,000 injuries each year. Workers injured on the job from exposure to hazardous energy lose an average of 24 workdays for recuperation.”

Look at the following mistakes and how to avoid them to help improve the safety of your facility:

6 Common Lockout Tagout Mistakes and How to Eliminate Them

1. Failing to Test the Controls

People who use the lockout tagout system can become overly confident in its ability to keep them safe. The fact is, however, that one of the biggest lockout tagout mistakes is assuming that the entire process is done once the power has been removed, locked and tagged.

In reality, you must go back and test the controls on the machine to make sure they don’t engage. In some cases, a machine will have a backup power supply available, or some sort of energy stored within the machine. If you don’t take the time to confirm that the power is entirely removed from the machine, it could result in a major incident.

This is why it is so important to always remember that the locking out and tagging out of the power is just the first step in the overall safety process.

2. Having Someone Else Perform the Lockout Tagout Steps

People are often in a hurry when getting ready to perform any type of work on a machine. This can lead to people wanting to take shortcuts. One of these shortcuts is when the person who will be going in the machine asks someone else to remove the power and lock it out.

To avoid this type of lockout tagout mistake, it must be mandatory that the person or people who are going into the dangerous area will be the ones to do the actual lockout tagout process. This is the only way to be entirely sure that power won’t be restored before it is safe.

3. Only Locking the Control Circuit

Another common mistake that is made is when someone decides that it is acceptable to just lock out the control circuit rather than the main power source to the machine itself. This is often done because it may be easier to access or closer to the area where the work is being done.

To avoid this mistake, it must be clear that it is only acceptable to enter a machine when the lockout tagout process has been completed on the main power source for the machine itself, and no shortcuts will be accepted.

4. Skipping the Process for Quick Jobs

One of the most dangerous, and unfortunately, most common lockout tagout mistakes is made is skipping the process all together for quick jobs. Someone may need to step into the machine to check on something, or to replace a small part. The individual may think that because they will only be in the area for a brief moment that it is not necessary to go through the entire procedure.

Even one second in these dangerous areas can lead to a potentially deadly accident. It must be made absolutely clear that it is never acceptable to go in these areas without first completing the lockout tagout process.

One way to remind people about this policy is to print off safety labels on your LabelTac 4 PRO industrial label printer. These custom labels can say something like, “Do Not Enter without Completing the Lockout Tagout Process.”  Whatever you choose to have it say, these labels can be a good final reminder to anyone entering the area to ensure they have taken the proper precautions.

5. Unaware of the Hazard Area

One risk that some people don’t think about when looking at keeping machine areas safe is that some people won’t know that the hazard exists. This can happen with exceptionally large machines where some of the risk areas are big and easy to walk into.

In these instances, someone may walk into the area without realizing that they are going into danger. To protect people from this, it is important to make it clear that each entrance or exit area to the machine is clearly marked.

There are many times when more than one person has to enter the machine to complete the job. When this is done, the lockout tagout procedure requires that each of the individuals puts their own lock on the power source so that they all must be out before power can be restored.

Unfortunately, a common lockout tagout mistake is to just have one person’s lock in place, assuming that everyone will come in and out of the machine together. Even if this is the plan, it is never an acceptable practice. Every person in the machine must have their own lock in place so that there is no risk of someone being left in the machine alone and the power being restored.

Strict Adherence to the Procedure

As you can see, the most common lockout tagout mistakes are all centered on occurrences when people don’t strictly follow the procedure. It is almost human nature to try to find shortcuts, and this is often a good thing. When it comes to safety procedures, however, this is never acceptable.

This is why all training and enforcement of the lockout tagout process, and any other safety processes, must focus on strict adherence at all times. When done properly, your facility will be able to virtually eliminate accidents and injuries caused by working within a machine.