Panda Express – The Relationship Between Speed and Quality In Business 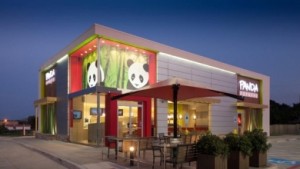 We live in a rapid fire world. Orders come in from online storefronts only to be packaged by assembly line robots and shipped out with computer tracking. In some industries, be they highly computerized or not, production teams can barely keep up with demand and a literally constant flow of goods is pumped out day and night. There is a constant drive toward speed and perfect efficiency in just about any business, and LEAN principles, along with other business theory teachings, espouse the value and need for such thinking constantly. At some point, however, we have to ask when our need for speed might be causing us to sacrifice quality, customer value, worker safety, and public perception.

The other day I made a stop at a Panda Express restaurant for a quick dinner and noticed that the branch I was visiting had a drive thru. For those who don’t know, Panda Express is a Chinese style fast food restaurant with a number of dishes ranging from shrimp, to beef, to orange and teriyaki chicken – we’ll stop there, I’m getting hungry again. Anyways, I chose to order inside and noticed a large screen near the drive thru workers in the back of the kitchen. Among other things, the screen kept track of how long it took employees to fulfill each order and send a customer on his or her way, and a percentage count which I can only assume had to do with the amount of customers that should be served in a certain time period, or something to that effect.

This got me thinking about a couple of questions:

Among others. All of us have been in some sort of fast food restaurant experience in which a simple item, such as a fork, or ketchup packet, despite coming standard with an order, doesn’t make it into the bag. Or worse, when a part of your actual food order doesn’t come at all and you’re left having to go back inside and remedy the situation yourself or cut your losses. Could the pressure for time stress out workers and cause them to forget items? Possibly, but if this was the case businesses would have to have a good reason for keeping such systems around, even at the cost of their own accuracy from time to time.

I also noticed that inside, like most other Panda Express branches, there was only one entrance to stand in line and one exit/cash register to execute transactions. This, of course, meant that the speed of service was capped regardless of how many people wanted to order or how busy the venue became. Both of these conundrums got my gears twisting and turning, and I wanted to turn them into a sort of mini forum here to see what you all thought. I’ll list out each concern/observation on its own, then write out what I see as the pros and cons, and leave the rest up to your own thoughts and discussion.

The Drive Thru Timer 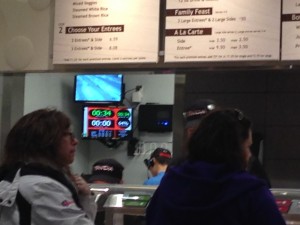 Benefits: First, let’s look at the reasons you might want to keep a kind of heads up display running and crunching numbers for your workers. First of all, it is true that people are likely to work quicker if it feels like they have incentive to; in the case of the timers, management, and by extension probably corporate leaders, have decided how much time an order should ideally take. Anything over this amount, they reckon, is too slow for customers. Employees work to fulfill orders in a more timely manner because they know failure to do so could result in punitive action. Additionally, visualizing goals is proven to help people achieve more. If a worker is told they should try to serve 50 customers in an hour during peak times, they are probably going to try and meet that goal. Rather than counting in their head, or just guessing, a display helps them know where they stand and how close they are getting to their goal. If the end of a time period is approaching and an employee is only at 87% of their goal, they might try to work extra hard and pick up the slack for the last 20 minutes to do as much business as possible.

Disadvantages: It is important to remember that this is all speculative, but Drive Thru displays probably have downsides as well, so here they are as I see them. One problem, as I mentioned, is that accuracy can suffer when speed is increased. Anyone working under the watchful gaze of one of those clocks is going to speed up (pro), but they might also forget things or mix up orders (con). On a more subjective level, the type of motivation being offered might also factor into the type of stress that is applied and how employees respond to it. For example, if you were getting rewarded with a bonus, free meal, etc. for completing a certain amount of orders in a set amount of time, that might be seen as more acceptable and less intimidating than negative reinforcement, in which the employee has to perform to a certain speed or be fired.

One In, One Out

Like a popular dance club at capacity, Panda Express lines can only let one person in for every one that goes out… and there’s only one register to “go out” through. 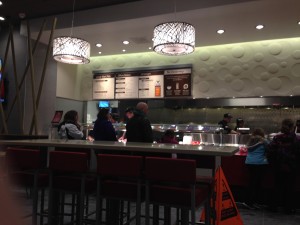 Benefits: This type of setup is undeniably simple: Orders are harder to mix up, people are served in the wrong order less often, and staffing positions are relatively simple. A linear system is an easy one to keep track of, and allows for hands-off or self management. Employees generally have more responsibilities each in this type of setup, but they are dealing with a smaller number of people at a time.

Disadvantages: Bottleneck situations in which one process slows down another are a very prevalent problem with this type of “one lane” setup. If the cashier runs into a problem, the rest of the line slows to a stop, etc. This could also cause problems when one popular food item runs out, though to be fair the chain seems to have when to restock popular items down to a science (plus you can simply stand aside and after paying and they’ll bring the rest of your order when it’s ready) so this isn’t really a huge downside.

In any of these situations, what it really comes down to is how happy the customer is, as long as the speed and accuracy are up to diners’ expectations, then there probably isn’t any issue. What do you think? Do these tools do as much harm as they do good, or are they worth keeping around? On that vein of thinking, could and would you implement similar systems in your own business(es)? Leave a comment below and let me know your thoughts.

Previous post How to Customize a Foam Tool Organizer