Safety Hazards with Robot Interactions Today & In the Future 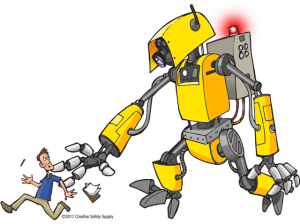 Robots have been an essential part of the manufacturing industry for a great many years, and their abilities have only expanded with new technologies. While a robot can certainly do a lot to improve the world, they also have some hazards associated with them that can’t be ignored.

Some of these hazards are dangers that those who work in manufacturing need to be aware of and deal with today. Others are potential hazards that we may have to face in the decades to come as robots begin to be used in many other areas of our lives.

Learning about both current hazards and potential future hazards will help ensure we can safely work with and around robots today, and long into the future.

The biggest safety hazard related to robots, by far, is going to be human errors. Robots are programmed to do specific tasks, and they can do them repeatedly for hours, days, months, or even years without variation. Humans, on the other hand, are often unpredictable.

When a person is working with a robot, the person has to do everything possible to ensure they don’t make any mistakes. This includes doing things like using lockout/tagout procedures when working on the robot, staying out of ‘danger areas’ around the robot, and having a great understanding of what the robot is going to do so accidents can be avoided.

Dozens of movies and books have predicted it already, and even some very high-profile tech experts like Bill Gates and Elon Musk have warned of it. Robots becoming self-aware. While it seems like science fiction today, the advancements in artificial intelligence are quite astounding.

If robots become self-aware, they may decide that humans are a threat to them, and attempt to destroy us. If this happens, our standard personal protection equipment just won’t cut it! This type of hazard is likely quite a long ways off, but it might be time to recommend to the safety manager that watching the “Terminator” movies as part of safety training is a good idea. After all, you can’t be too prepared!

Robots are designed to perform very specific tasks, and they accomplish this properly the vast majority of the time. When there is a mechanical error, however, the results can be unpredictable. If a robot arm has a joint break, it could be launched at a high velocity anywhere in the area.

To stay safe from mechanical errors, people need to make sure to inspect the robots for any signs of damage. In addition, wearing personal protection equipment can help provide you with effective protection in the event of a problem.

Another risk that may be present if robots become self-aware in the future is that they will decide that they are smarter and stronger, so they want to make the whole human race their slaves. These ‘intelligent’ robots may look at the centuries of machines doing work for humans as a justification to turn the tables.

Robot makers, and especially the software engineers, need to take precautions to ensure they are programming in safety checks to avoid this type of thing. Individual facilities can also minimize this type of risk by making sure everyone in the area knows where the emergency power shutoff switch is. This way, if the robots start acting suspiciously, humans can put a stop to it right away.

Robots, like all machines, need to have regularly scheduled maintenance performed on them to avoid problems. Without proper maintenance, a robot could easily break down when it is performing activities. Unlike a mechanical error that could cause the robot itself to act unpredictably, a breakdown can stop it from working at all.

If a robot is lifting heavy items with humans working beneath, the items could drop should the robot stop working. There are many examples of how a poorly maintained robot can greatly increase the risk for humans. Fortunately, the solution is quite simple. All facilities need to carefully track the maintenance performed to ensure all robots are kept in peak condition.

Many of the future risks from robots involve them becoming hostile toward us. The opposite could also be true, and wouldn’t even require robots to become fully self-aware. Each robot is programmed to improve the lives of humans in some specific way. In the future, it is not inconceivable to think that robots that are programmed to keep humans safe will be a part of our everyday experience.

If the programming has a problem, however, the robots could determine that they must keep us safe by preventing us from doing anything that has any risk at all! We would effectively be kept in small areas, away from all dangers, and also away from everything that makes life worth living. To prevent this type of hazard, robot developers need to be very careful with how they do their jobs.

If a robot experiences a power surge, it can quickly cause some serious dangers in the area. One of the biggest risks is that it will cause the robot to overload its motors, resulting in faster or stronger movements over a short period of time. This could result in damage to equipment and people in the area.

Power surges can come from lightning strikes, power outages, and many other things. Taking care to have surge protectors on all important equipment will help to reduce this type of risk. Another risk associated with power is an arc-flash occurring should the wiring be damaged. Arc-flashes can cause fires and severe burns in a fraction of a second. Taking proper precautions like wearing electrical safety equipment is critical. 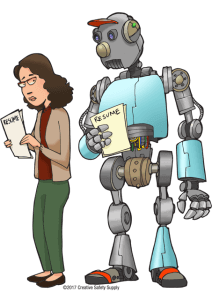 The last future hazard that we’ll cover here is likely the most realistic of the future problems discussed here. Robots are quickly advancing in their ability, and have already eliminated millions of jobs. As the advancement continues, it is easy to see how many other positions will become unnecessary.

As this issue approaches, humans need to determine what role that will leave them to fill. If robots do all the work, could humans simply eliminate the concept of money and have everyone provided with everything they want from the robots? This is more of a philosophical hazard than a physical one, but one that is worth thinking about none the less.

Robots can create a lot of different hazards, but they have also eliminated many other common workplace risks. In order to continue to improve safety in the workplace, and anywhere robots may appear in the future, it is important to be able to consider every hazard that could occur. Being able to better predict hazards will allow you to plan for them, and take action to prevent them whenever possible.