Over the years, I have learned that one of the biggest mistakes individuals and companies make is always looking for the big changes to reduce waste or improve efficiency. They keep focusing on finding the next big, innovative move that will result in dramatic improvements to the bottom line. While these are great when they do happen, the vast majority of improvements in any workplace will be from consistent, small improvements that improve the way a repetitive task is done.

One of the best examples of this I’ve ever been a part of was when working for a manufacturing facility years ago. At the time, the facility was looking to become more competitive by eliminating waste. They felt that waste elimination was the best way for them to improve profitability, because it was the one item they had the most direct control over. As it turns out, they were right.

I was one of several people in the facility who were asked to look into efficiency improvement opportunities in the facility. Along with the other individuals, we began reviewing the way work was done throughout the company. During our investigation, we found several small ways the facility could eliminate waste, including selling off certain types of scrap metal that was being thrown away. We found that one of the biggest areas of waste wasn’t with physical products, but with wasted time and energy from the employees.

A Small Problem with a Big Impact

After spending some time watching the way people worked in the facility, we found that a significant amount of time was being wasted by employees who had to walk to the inventory area, request the parts or tools they needed, and then walk back to their work area. While this isn’t ideal, that wasn’t the main problem. What we discovered was happening was that with about 7% of requests, the wrong item was pulled and given to the requestor. This caused several problems:

Even when the correct item was pulled, the frequency of mistakes caused wasted time because most employees would want to check for accuracy before moving back to their workstation.

While a 7% error rate may not seem overly significant, it was far more than it should have been, and it caused some big problems with wasted time, energy and even products that were made with the wrong parts. When this was identified, we knew that we had to do something to fix the problem.

Coming Up with Solutions

Once we had identified this problem, we got together to come up with potential solutions to minimize or eliminate the waste that it was causing. We came up with a number of great ideas that would help to improve inventory picking, and reduce the waste as much as possible. It was agreed that there were a number of things that could be done, some very simple and some more complex, that would work together to streamline this entire workflow. The solutions we proposed were: 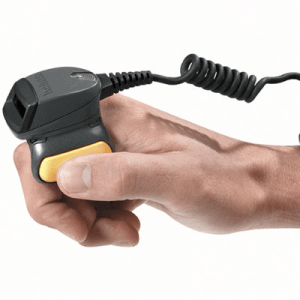 When we presented our ideas to senior management, and the head of the inventory department, we got approval to implement all of our changes. There was no resistance, because the changes were fairly minor and the cost was within the project budget. We also figured that the digital request system and thumb scanner would pay for itself after just one year of use, by reducing waste.

The changes started by reorganizing the inventory area based on the areas where parts were used. There was some resistance from the inventory pickers, because they were used to things being the way they were. The other changes (other than the technical updates) were done after this reorganization was completed.

The implementation of the digital requesting form, and thumb scanner verification system were put in place about three weeks after the other changes were completed, due to needing to install the required software and get the thumb scanners in and set up. We also took some time to train everyone on how to use this new system to ensure there would be minimal negative impact from these changes.

We let the system run with the new changes for about a month, while collecting data to see how effective the changes were. During the first week after the change, it was taking slightly longer for people to order and get the parts from inventory that they needed. This was expected, due to the changes that were put in place. After that, however, the average time it took to get a part began dropping quite quickly.

In addition, the number of improperly used parts dropped to 1.5%, largely due to the thumb scanner verification system. There was still an occasional part that was picked improperly but the mistake was quickly caught thanks to the verification system which let the picker know that the item being pulled didn’t match the line item on the picking slip.

Overall, the change was a huge success, and the company was very happy with the results. Even though none of these changes were extremely innovative or drastic, they still resulted in some significant improvement. The waste that we were able to eliminate had been occurring for years, resulting in a lot of lost profits, which shows just how important it is to always be on the lookout for the simple changes that can bring long term improvement.