Eclipse Safety: Watch The Skies Without Wrecking Your Eyes

On August 21, 2017, North America will be visited by a rare celestial event that NASA describes as “nature’s greatest spectacle.” While most of the continent will bear witness to a partial solar eclipse, those living in (or visiting) a roughly 80-mile-wide swath (known as the “path of totality”) stretching from Lincoln Beach in Oregon to Charleston, SC will see a total solar eclipse — the first to traverse the United States mainland since 1918!

As you’d expect with an event this rare, excitement is at a fever pitch. Here in Oregon alone, tens of thousands of tourists will flock to otherwise sleepy, rural communities across the state in the hopes of glimpsing the celestial display. Finding a good vantage point, however, is only the first step in preparing the ideal eclipse viewing experience. Step two — the most important step — is finding a way to keep your eyes safe while staring at the Sun.

What Is A Total Solar Eclipse?

A solar eclipse occurs when the Moon moves between the Sun and Earth, obscuring the Sun’s light from terrestrial viewers and casting a shadow of the Moon onto our planet. While this shadow is quite large, only a small swath at its center, known as the “umbra,” will witness a total solar eclipse, where the position of an observer lines up with the 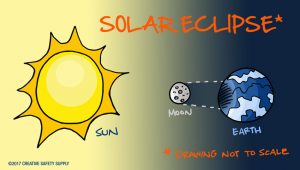 Moon and Sun in such a way as to completely obscure the Sun’s rays. Because observers in the umbra experience rapid decreases in temperature while day seemingly turns to night in mere moments, it’s no surprise that many cultures throughout history have viewed the total solar eclipse as a sign of great supernatural significance.

As an unfathomably gigantic, swirling ball of perpetually burning gases, our sun is constantly spewing a tremendous amount of energy in the form of heat and light in the general direction of our planet. That’s great news for the plants and animals (including human beings) that rely on sunlight to thrive, but it also poses a major hazard to our eyes. While our eyes need light to see, they can only absorb a finite amount of energy before the delicate 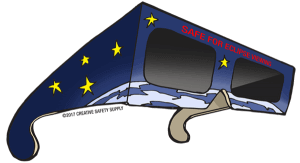 biological machinery within starts to suffer damage. With that in mind, the idea of watching a solar eclipse seems ill-advised at best, but, as always, human ingenuity has created a simple solution that allows us to go beyond our bodies’ usual limits.

Known as “eclipse glasses,” these unremarkable cardboard spectacles are the most common personal protective equipment recommended by NASA’s Goddard Institute for Space Studies for anyone hoping to view an eclipse. As simple as they appear, these glasses protect a wearer’s eyes using a dark, semi-transparent plastic film coated with a layer of aluminum that’s designed to block out a majority of visible light and solar radiation. But don’t let their modest appearance fool you: These are solar filters specifically designed for a very demanding task. 100,000 times darker than ordinary sunglasses and better at blocking out light than all but the most specialized welding masks, these solar filters provide protection you simply can’t find elsewhere.

Important note:
However you acquire your eclipse glasses, you’ll want to make sure they meet the official ISO 12312-2 standard which certifies that eclipse glasses are suitable for direct solar viewing. Glasses that fail to meet this standard are NOT guaranteed to protect your vision.

Fortunately, great protection does not come at a great cost. Amazon is currently offering a pack of 10 for less than $15, and many libraries and community centers will be offering eclipse glasses free of charge to prospective sky watchers.

Telescopes With Solar Filters: The best view of a solar eclipse is a magnified view, but magnifying the sun also enhances the danger it can pose to your eyesight. If you’re hoping to watch the upcoming eclipse through a telescope, you’ll need a solar filter fitted to the large end of the telescope. Smaller filters that attach to a telescope’s eyepiece are available, but they do not provide sufficient protection against sunlight and solar radiation.

Projection: There are a few different projection methods available, but they all hinge on projecting an image of the eclipse onto a plain white surface. The result is a glowing, real-time facsimile of the eclipse that offers viewers a slightly less stunning view in exchange for eliminating the need to wear special protective gear.

Next post 5 Common Office Injuries That You Can Avoid