I was recently brought in to assist in a Lean event for a large manufacturing facility, with the goal of eliminating waste, and completing the implementation of Lean strategies. The facility had already begun the process over the past 18 months, and had done quite an impressive job. When they consulted with me, I was asked to put the ‘finishing touches’ on an already effective Lean system, and help them to identify waste that they may have overlooked because they were ‘too close to the situation.’

I admired the company’s willingness to recognize this as an issue, and gladly accepted the assignment. I spent the first two weeks primarily going through what changes had already been made, and learning about the facility itself. While they had done a great job putting the lean strategies to work, there were a few areas where they still had quite a bit of room for improvement. Specifically, they were adding a lot of waste in the form of excess transportation.

After I took two days simply following the course of orders from the moment they came to the facility, until they were shipped out of the facility, I quickly saw that there were a lot of inefficiencies. While they had added a lot of improvements to the way each task was done, they had, up to this point, overlooked the amount of time and effort being wasted simply moving the parts from one area to the next. While watching this system at work, I identified the following things:

When I presented these facts to the senior management, and let them know that I believed it would be possible to significantly reduce the amount of time wasted in transportation, they gave me the green light to run a three day Kaizen event.

Preparing for the Event

In order to run this event, I identified one individual from each step of the manufacturing process to work with me over the course of the next three days. I also asked one member of the senior management team to be available to consult with during this event.

Prior to the beginning of the event, I created a detailed diagram of how each product made in the facility got from the first step to the last, highlighting areas where I believed there was waste added in the value stream. I asked everyone involved with the Kaizen Event to review the diagram and start thinking about how the waste could be eliminated.

During our initial Kaizen event meeting, I stressed the importance of everyone participating in every step of the event. I explained that I didn’t ask these individuals to be on the team so they could cover their own step in the manufacturing process, but so they could all share ideas and influence every part of the process.

In addition, I shared with them my goal of reducing the average production length from 6 hours 15 minutes down to 5 hours. I also wanted to eliminate two of the four people who were involved with the transportation of parts and products, so those two people could focus on value adding jobs.

Finally, I made it clear that while these are our primary goals, we should always be looking out for areas where waste can be eliminated, and that all ideas for improvement would be more than welcomed.

One of the first things we did, after the kick-off meeting, was to hold a brain storming session on things we could do to improve the efficiency of the manufacturing process. This was a fast paced session, where we came up with dozens of ideas. Some of the ideas were later implemented, some needed some adjustments, and others had to be scrapped. The following are a few of the top ideas that we came up with:

Each of the above ideas (as well as many of the others) were considered, and those we wanted to move forward with were analyzed closely. We came up with estimated up-front expenses associated with them, and how much waste they could eliminate.

There were dozens of other ideas, many of which were implemented during this Kaizen Event. The above four, however, were some of the most significant, and illustrate a variety of different outcomes that are common with Kaizen Events. 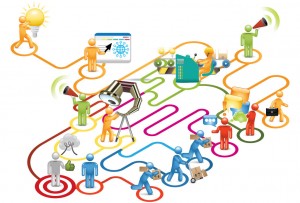 After brainstorming these ideas, we had to go to the senior management resource for this event to see which ones were feasible. While we knew these ideas would help achieve our goals, some of them would require significant investments from the company, which we weren’t sure would be an option. The senior management team came back with the following responses to the above major initiatives:

After all the approved changes and improvements were made, we had what was largely considered an extremely successful Kaizen Event. We had reduced the average transportation time from 6 hours 15 minutes to 5 hours 5 minutes, with an expected 20 minute improvement once that final machine was replaced in the next 3-5 years. We eliminated the need to have one of the employees involved with transportation at all, allowing them to focus on other responsibilities. Another employee cut the amount of time they were involved with transportation activities by 60%.

Products were now taken on and off machines 1-3 times, depending on the product, and the process for each of these moves was streamlined significantly. While we didn’t meet all our goals, there were some significant improvements, with more to come in the future.

In addition to the above mentioned benefits, we identified 17 small areas of improvement throughout the manufacturing process. These improvements resulted in reduced scrap packaging being used during the shipment process, as well as reduced waste from employees standing around at the beginning of their shift. This was done by making a small change to the hours of operation for two of the teams (which the employees liked better, so it also helped with morale).

Overall, the Kaizen Event went very smoothly, and helped to improve the way work got done in the facility. In addition to the direct improvements, it also helped to show how Lean strategies can be used throughout the facility to create real, positive, changes in the workplace.

A special “Thanks” to Creative Safety Supply for supplying all the materials for this kaizen event. Without their customer service and quality of products our project wouldn’t of been a success.

Previous post How to Make sure Employee Training is Effective & Retained